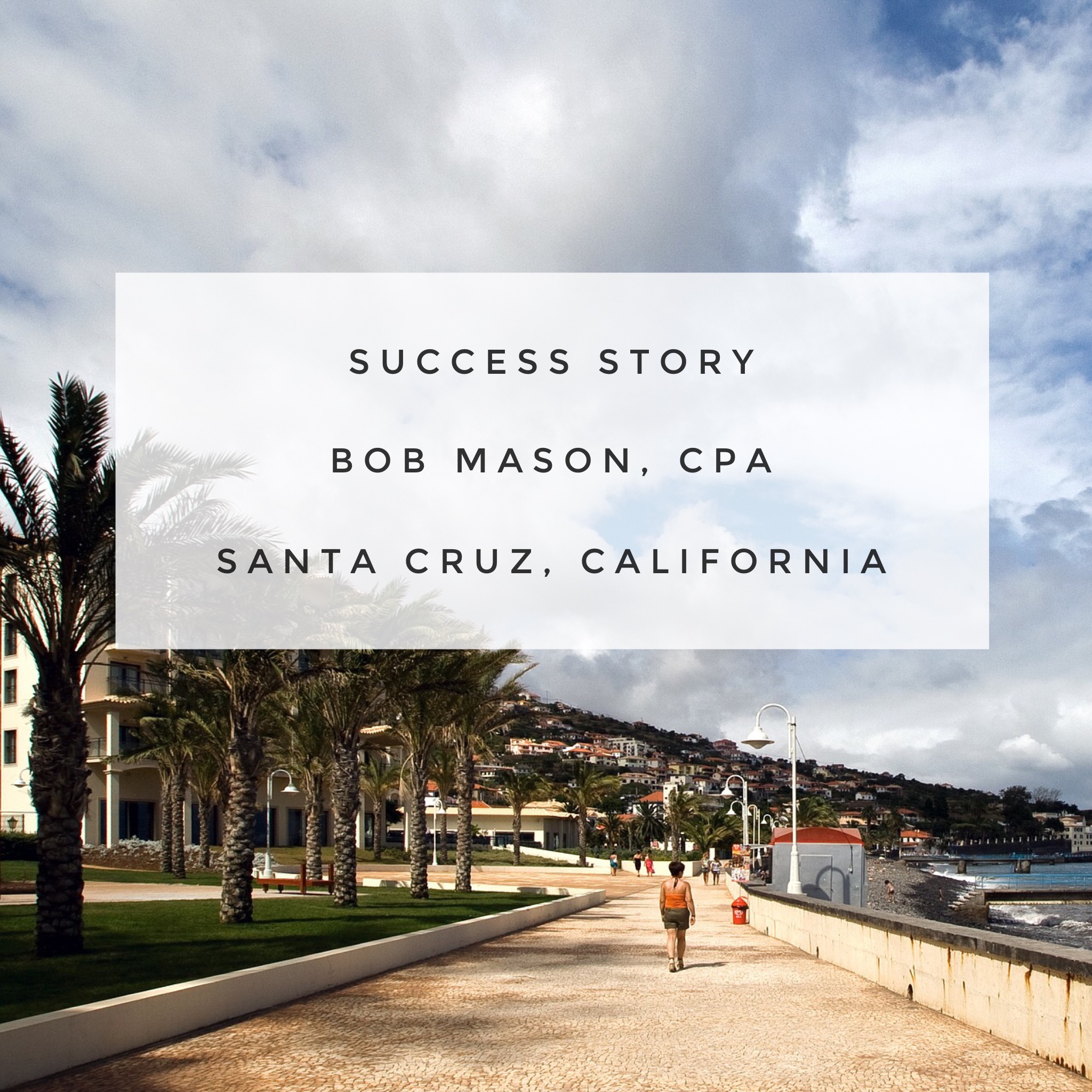 After spending seven years taking a high tech firm public, Bob Mason, CPA from Santa Cruz, CA decided it was time to be on his own. “I had worked for an internet company that was doing telemarketing and sales, and had spent 20 years with various high tech firms. At times it was a roller coaster ride with firms running hot and cold. I saw net worth positions grow and then evaporate. I wanted to get off that roller coaster and build equity in a business that would be stable and grow consistently, and not be subject to the cycles of high tech.”

Bob saw NCI’s ad in the Journal of Accountancy and called for more information. After speaking to NCI account rep, Todd Steinberg, Bob decided NCI suited his needs. “Todd did a great job listening to where I was in my career and helped me analyze which program was best for me. A couple of things clicked for me. One, part of your program utilized telemarketing and I had just spent the last seven years with a firm that did telemarketing. I felt that was a great way to build a client base quickly, and two, Todd was very knowledgeable in the valuation of CPA firms. I found these two combinations helpful in moving ahead with the decision to open my own practice.”

Bob opted for the fast pace growth of our Client Processing and Acquisition Program (CPA) for several reasons. Bob had previously worked in a firm that twice made Inc. Magazine’s 500 fastest growing firms. He wanted a culture that would provide that type of atmosphere along with a plan to manage that growth. “NCI’s Plan III provided everything from how to layout my office to client acquisition. Plus I wanted to capitalize on the upcoming tax season, so I chose the more aggressive approach.”

Bob attended our three-day Practice Development Seminar in December 2000. Starting in November, Bob worked on getting an office and securing other start up material. “Once again, Todd was very helpful in providing me contacts for selecting software and other aspects of getting my operation ready to begin business.”

“We made our first telemarketing call on January 23, 2001 and signed up our first client that day.” I asked Bob where his practice is today with respect to gross annual billing? “I was just looking at my cash receipts and collected $60,000 for the month of April excluding tax returns. I say we are on target to do $475K to $520K this year. We accomplished this in 15 months! We are very pleased; now we’re focused on trying to mature the practice and work more efficiently.”

I informed Bob that his growth for the 15 month time frame indicated, was a new NCI record. That much of the credit goes to him and his client service rep, Bob Walden, for doing such a great job with our program. Bob indicated one of the reasons he felt his success was so remarkable was his willingness to stay involved and meet with his salesperson and telemarketers weekly.

“Bruce, you counseled us at the seminar on the importance of meeting weekly with the sales team. In talking with other NCI accountants, I find they are not as interactive with their sales team as we are and that has really helped. We developed quotas for both sales and telemarketing, so they know when they’re having a good or bad week.”

I asked Bob to comment on the management training he received from Duane Gravley. “My only regret is I did not do it six months sooner. Duane taught me a number of straightforward, yet simple ideas for processing monthly compilations more effectively.”

When asked about plans for the future, Bob indicated his original goal, when he first started talking to us, of a $5,000,000 practice has changed. “I came from fast growth environments and I wanted to dream big. Five million dollars is definitely possible if I want to take on partners, and I probably won’t. There is a lot to be said for completely doing your own thing. I see us now growing to about $1,000,000 to $1,200,000 and should be there in another year or two.” Bob indicated another helpful aspect in his marketing campaign is providing incorporation services. He got the idea from Norma Fletcher, NCI Senior Account Rep who hired and trained his sales rep and telemarketers. Bob indicated they are doing two to three incorporations per month and that helps with his cash flow as well as providing another value added service to his clients.

At what point do you introduce the incorporation idea? “When we are in front of the prospect and we introduce our list of services. We find the more work we do for our clients the better they are as clients and the happier they are. We find most of our competitors talk to their clients two, maybe three times per year at best. With the NCI program, we talk to our clients two to three times per month. This allows us to provide a higher level of service.”

Bob also indicated that after 15 months in practice he receives two to three referrals every month, a testament to the outstanding service he provides.

How would you sum up your decision to utilize NCI to build a practice? “I just wish I had done it five years earlier. I’ve enjoyed every aspect thus far, but the greatest one is the joy I get from helping these independent business owners run their business more effectively.”