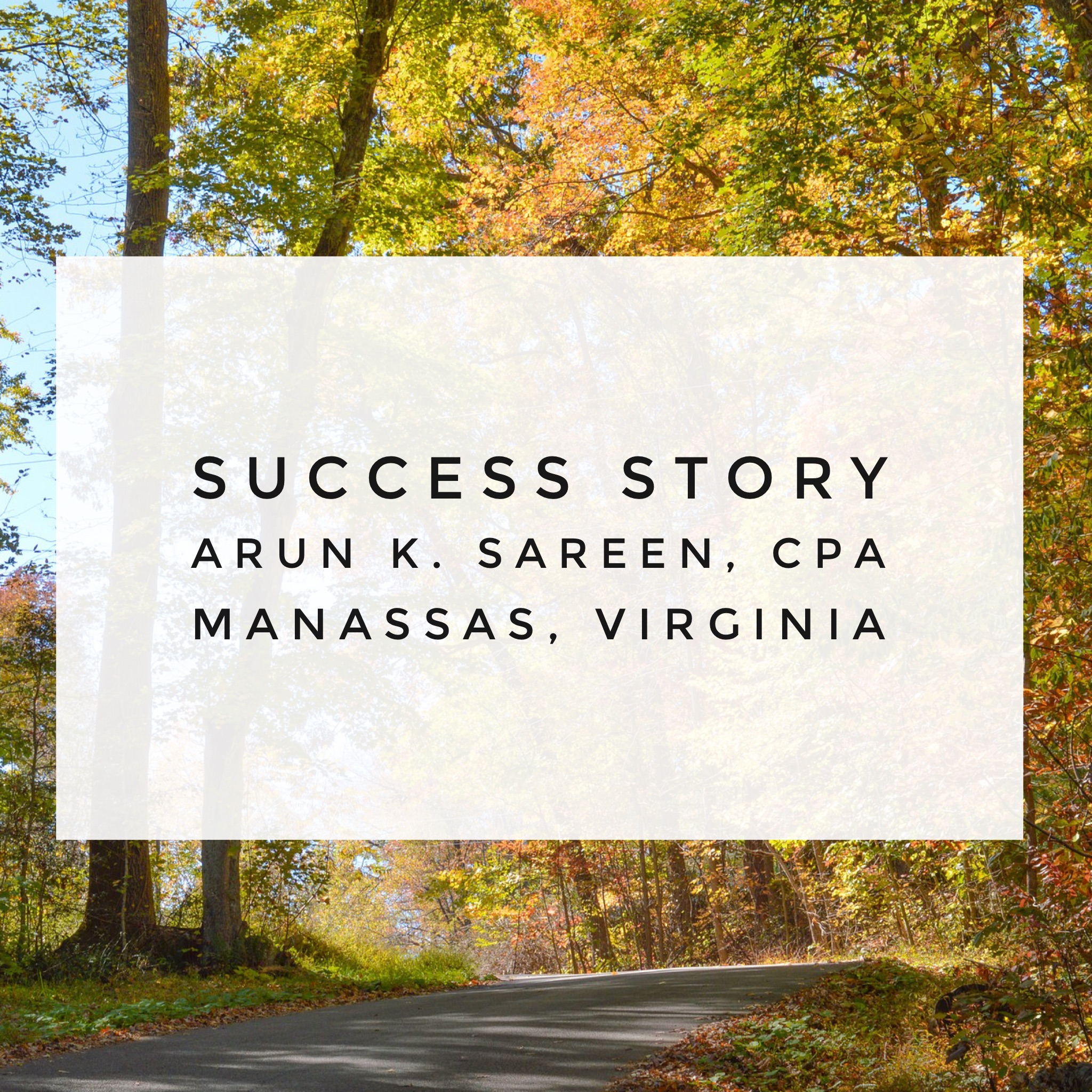 In 1993 Bruce Clark received a call from a CPA by the name of Arun Sareen. Arun, a corporate accountant, was looking to buy a small practice that NCI had for sale in VA. That particular practice was no longer available however, so Bruce went on to explain to Arun how NCI could help him to grow his own successful practice. After doing some research, he agreed and signed up for a Plan 2 Client Acquisition Program (CAP). What follows is the rest of this amazing story, told by Arun himself.

Chris: How much growth have you added since implementing the Plan 2 program?

Arun: I started from ground zero with the Plan 2 program, I had nothing, I had just come back into the country. That was in [March of 1993.] Today we are at almost 4.5 million a year.

Chris: Impressive, and how long did it take you to get to a million in billings?

Chris: What was your biggest concern before you signed up for Plan 2?

Arun: Well I wanted to check some references out, because it sounded too good to be true. They were giving a guarantee of like $80,000 a year and I said boy if I could do [that] I would really kiss their feet (laughs.) The guarantee said $80,000 a year but after I’m in the program for 2 years [I said] wow, they should have given the guarantee $80,000 a month!

Chris: What was your biggest challenge running the program?

Arun: The challenge was not getting the business, it was delivering the services. There was so much opportunity.

Chris: What are the future plans and goals for the practice?

Arun: Well we’ve sold two parts of the practice already otherwise we would be close to $6 million. Right now we have three locations that run full-time in Virginia and then we have two that open up in tax season just by appointment. Right now, things we’re slowing down so we’re back doing marketing again. I’ve been out of the marketing field for a while. Well the marketing department has always been there, I was just taking 20 weeks of vacation a year, now I’ve cut it down to 16 [weeks.]

Chris: What advice would you give to someone considering using an NCI program?

Chris: My father (Bruce Clark , CEO and founder of NCI) recently mentioned to me something you said to him. Something about what happens when you deviate from the NCI program. What was that again?

Chris: Were your surprised by the growth this program generated for you?

Arun: I was shocked. It was not something I was planning to do, I just wanted a little practice.

Chris: That didn’t quite happen (laughs).

Arun: We just didn’t know how to turn away anybody. Once all those dollars are coming in at a fast pace, you get [hooked.] You’re like I’m not going to let go, I don’t know when this thing will stop!

Chris: Hang on as long as you can, right?

Arun: Exactly, except the damn thing kept growing and growing and growing. [Although] this year we are [feeling the recession and] we are down by about seven tenths of one percent. We don’t sign anybody for less then $375 a month. In the last month… we signed up, though the appointment setting and going out and selling with my marketing guys, one company we signed up is $850 a week. One is $750 a week. One is $350 a week and one we are signing up is four hotels at $330 a week each.
How many sales reps. do you currently employ?
I have three sales reps. currently.

Chris: One final question, can you sum up your overall feelings about Bruce, NCI and the marketing program?

Arun: I can tell you, Bruce is an excellent man. Whenever I say Bruce I need this or how do I do that, he is there to support you. He’s also good as a coach and he looks at things from outside the box and he gives me straight out honest answers and he doesn’t charge for his advice which is good. I believe that without the NCI system, we wouldn’t be where we are now.

Another thing you should put in the article is that the NCI program is not limited to just getting clients at the bottom of the pile. Like I said, the average client I’m signing up right now is at least $350 a week, which is like $1,500 a month. Those are not little mom and pops, these are good size companies and you can sign up clients worth about $15,000-$60,000 a year through the same system.

Chris: Very true, most people don’t realize that fact. Is there anything else you would like to add?

Chris: Thank you very much Arun for taking the time out of your busy schedule to take part in this interview and for being a great client and reference for us over the past 16 years.

In our last newsletter, we featured one of Arun’s Client Service Representatives, Ken Tibbs.