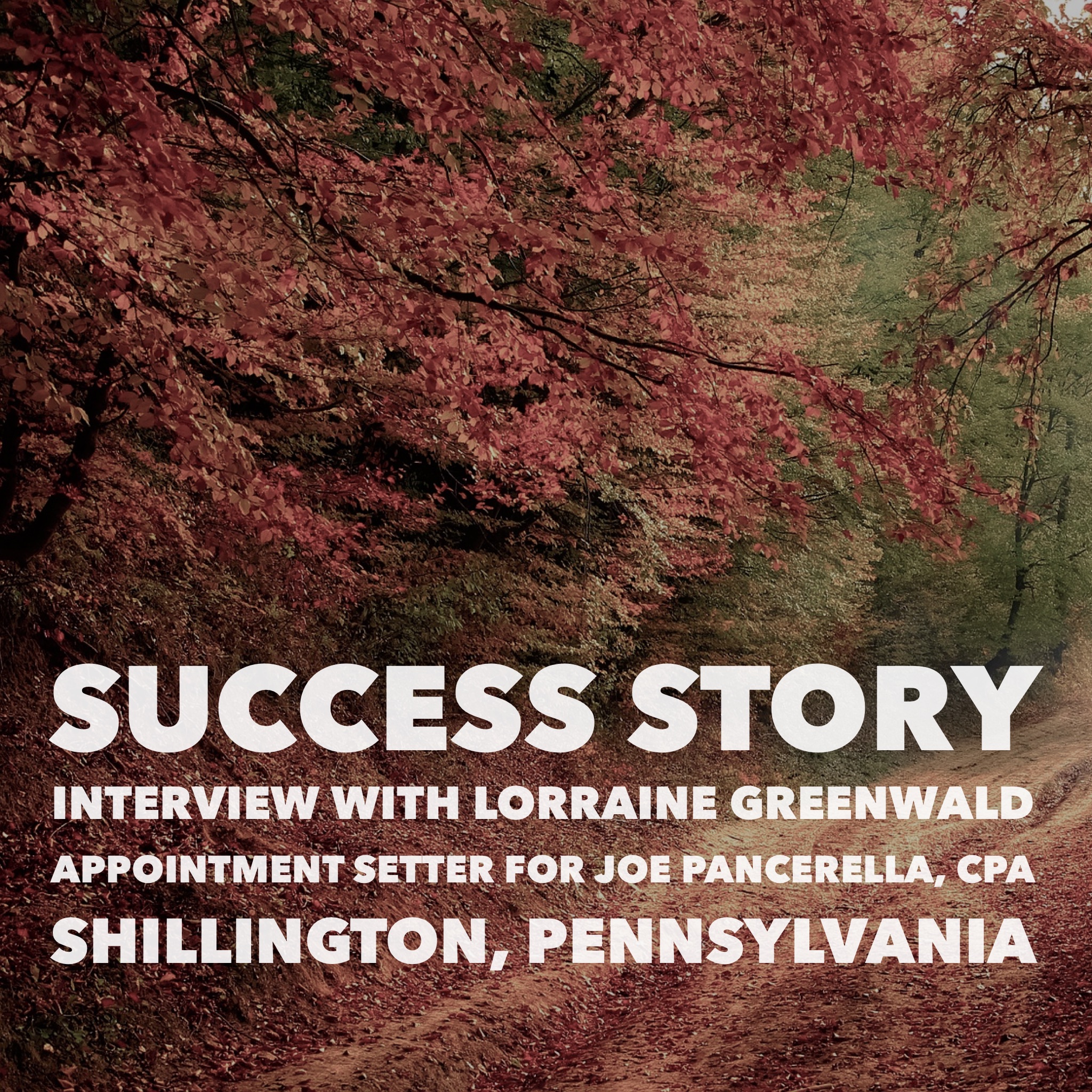 Chris: Can you tell me a little bit about your background.  Were you working for Joe before you started in the appointment setting role?

Lorraine: No, I worked 20 years ago for a CPA firm but my background is in banking. Well, first of all, I’m a nursing school drop-out. That was my background. After two years of going for my RN, I decided I just didn’t want to be a nurse. So I went into banking as a bank teller and worked myself up into credit; I had 16 years in the banking industry. That was my forte: banking. I traveled extensively; I’ve been to and lived in for three years. So I was back and forth and, after banking, I worked for a friend who was a CPA. Then, I didn’t work for a while and I took a job at Progressive Business Telemarketing. We tried to sell CD-ROMs to corporate businesses. It was not for me but I did it at the time to get back into the working world.

That probably gave you a decent understanding of the importance of accounting work and the financial aspects of it.

I’ll tell you, though; bankers and accountants are like dogs and cats. They do not get along. Debits and credits to a banker are totally different than to an accountant. It was tough for me in the beginning. I help Joe out with the taxes during tax season, as well. Once the return has been reviewed and completed, I package it up and contact the client to let them know it’s ready.

Were you one of the initial appointment setters selected by Pete Borrelli?

No, I recently found out that I was actually Pete’s third choice and Joe’s second choice. About six weeks in, one of the original people hired wasn’t working out, so I got a call. The other original appointment setter, Sarah, was the one who trained me. The training and approach was strictly by the book and we don’t deviate from what has selected for us to say.

What was the most common objection that you heard, and how would you handle that?

“I already have an accountant,” is by far the most common objection. In the beginning, that was sometimes difficult to approach.  I would use the rebuttal in the script and I would do my best to listen to and acknowledge whatever the prospect was telling me. I also make it a point to stress that not all accounting firms provide the same services; they vary widely, which many people don’t realize.  Then, the next key words are, “Does your accountant offer QuickBooks consulting?” We are experts in QuickBooks, so if I have an opening there, that will sell it.

So this would work for someone who was using QuickBooks but their accountant wasn’t interacting with the client’s QuickBooks files directly.

Exactly.  I really have my rebuttals down at this point; that was difficult in the beginning. I have noticed in the past year that due to the economy, the new business lists are not as golden as they had been, because people do not have the money to invest right now. The objective, if I can give some advice, is to listen and acknowledge. You start to get a feel for whether they’re listening to you or not. In the script, when I say we specialize on the needs of small- to medium-size businesses and we have a program that could potentially help you control costs, pay less tax, and improve profits. I always make sure to emphasize those last items. The key, though, is to listen and acknowledge whatever their circumstances may be. Also, you can’t do this job more than maybe five hours a day. You won’t even notice that you’re faltering, but the person on the other end of the phone will hear it in your voice. You also have to get comfortable with the script; at this point, I know it so well I don’t even have to look at it, but it takes time and practice to get to that point. You also have to know your product, know what is being sold.  I know what everyone does here in the office.  I know we have great accountants. Our clients come back to us because they know the work gets done meticulously. If somebody says, well, my accountant did this to me, there’s no way you should lose that one. If they are disgruntled or unhappy with their accountant, that’s who we’re looking for.

What were some of the main reasons people agreed to an appointment?

Right now, I would say, because we’re in the fourth quarter and we’re heading towards tax season, I’ll get people saying it’s going to hurt their budget and they have back work. So I say we specialize in getting them up to date on their back work. One of the keys is getting through the gatekeeper, which can be very difficult. Sometimes no matter what you do, you won’t get through, so in those cases, I usually ask to be transferred to voice-mail.  In that way, I can at least try to make an impression in my message. I leave a detailed, articulate message and I always end it with, “I look forward to hearing from you.” If I do get the decision-maker on the phone and get them talking, maybe they’re curious or a little interested. I always try to emphasize that not all accountants provide the same services, so doesn’t it make sense to compare?  People also would respond to other elements of the script: “improve profits” will jump out at most people. If they tell me, “It’s not a good time right now,” I always push to try and get their e-mail address to send additional information. Between the messages and the information that we send out, people do call back. Plus, our website is phenomenal.

Yeah, I’ve seen Joe’s website; it’s very nice. He uses all the NCI-recommended bells and whistles and it shows. Would you give out the web address to prospects?

No. I was told not to do that; I try and get their e-mail address and either e-mail or mail information. If someone were to ask for the website address, I would, of course, give it out.

So, the idea was to get information to them rather than relying on them to take their own initiative and go to the website, which makes sense. What kind of success have you had calling on new businesses?

In the beginning, it was great. Lately, with the state of the economy, it has become more difficult.

How do you keep yourself from getting discouraged on tough days where you don’t set any appointments?

You have to be focused. If you aren’t focused, the time will just drag. You have to go on to the next call because somewhere down the line someone will hear what you have to say and be interested. It’s a numbers game. The rejection itself doesn’t bother me at all, though. I’ve heard it all at this point (laughs.)

To what do you attribute your success and longevity in the position?

I think part of the longevity is because it’s only four hours a day. I can handle that. I tend to get in the zone when I’m calling and go straight through the four-hour shift; I don’t take a break. I know that eventually I’ll find someone who will hear me out and be interested. I don’t let myself get distracted and I make sure to keep my enthusiasm and energy levels high. I’m offering a terrific service; you can’t beat it.

What were your interactions like with the CSR, Tim Kline? How did he help you with your job and how did you help him with his job?

Well, we both had each other’s back. We would try to work out any mistakes in the process early on. He critiqued me in the beginning and he wanted me to be more aggressive.  He also made it a point to have us explain that the appointment would last between 30 minutes to an hour and to be clear on some of those details, because, otherwise, the appointment quality isn’t there. We had a few appointment setters who would set appointments and then Tim would show up and they wouldn’t know what was going on. To Tim’s credit, when he got a foot in the door on a quality appointment, he would most likely get a sale. Tim is fantastic.

What kinds of questions would you ask a prospect who was interested in setting an appointment?

Early on, we missed some important questions and Tim helped us work that out. Some of those things will come back to haunt you. Sometimes prospects will not give you all the information you need. As an example, maybe I spoke to “Anne Smith” and it turns out she is not actually the owner of the business. Or it’s an LLC and there are partners who have to get involved in the decision-making process. Tim had us ask the prospect, “Are you the decision-maker or can you please make sure all the decision-makers will be present at the appointment?” I would also go through the questions on the appointment report, like, “How long have you been in business?” I also made it a point to always double check the address and e-mail.

That’s true. Another thing that I think worked in our favor is that, in our area of PA, people were shocked by the approach. You’re an accounting firm that wants to send a sales representative to meet with me.  What? Huh? It was practically unheard of around here and it has worked out quite well.

What advice do you have for all of our appointment setters out there doing this tough job?

The days can feel long sometimes. My best advice is to take a deep breathe, listen and acknowledge. You’re going to get very frustrated if you allow yourself to become frustrated. The key, though, is to listen and acknowledge, and it’s not easy. A younger person is probably going to be thinking 300 different things while trying to do this job. You have to be able to focus on the task at hand for those four hours.

Can you elaborate on what you mean by listen and acknowledge?

What I mean by that is to really listen to what each person is saying. Not just their words, either, but their tone of voice. You need to listen for verbal and vocal cues that will help you to open up a dialogue with that prospect. You’d be surprised. I’ve had people open up to me about some pretty intimate details. You have to have empathy to get them to open up to you like that.

What is the most rewarding thing about this difficult job?

I’m most proud of the fact that the process starts with me.  We have signed and secured a lot of great, profitable clients over the past two years and many of those started with me. That feels pretty good and I know it means a lot to Joe.

I know Joe is thrilled with the amazing results his sales team has been able to generate. Thank you so much for you time today, Lorraine. It was a pleasure interviewing you and you gave a lot of great insight and advice for our many appointment setters across the country.