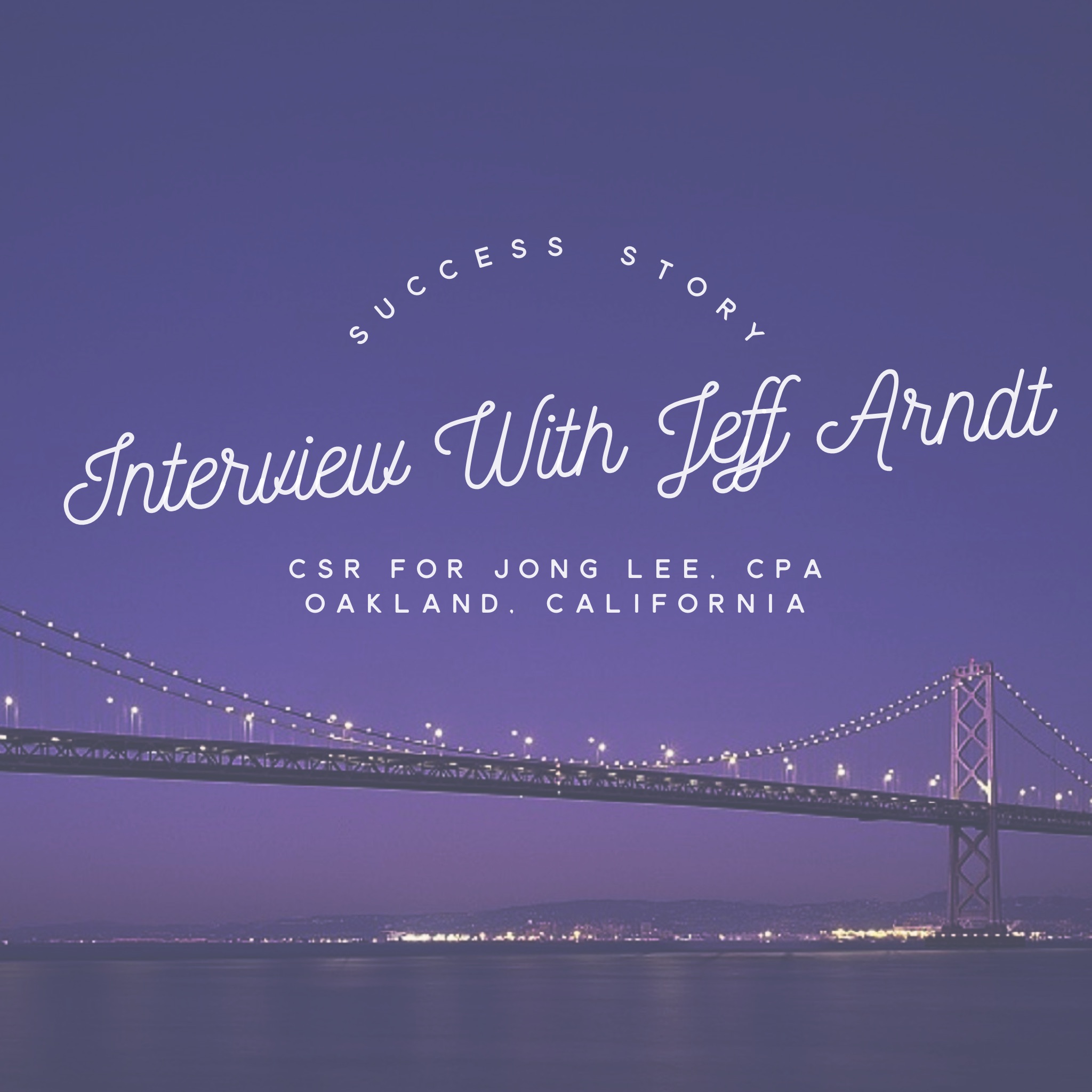 Seeing as we are in the midst of tax season instead of approaching an accountant for a success story during this busy month I instead conducted an interview with a successful CSR. The gentleman being interviewed is Jeff Arndt the CSR for Jong Lee, CPA in the Oakland , CA area. Jeff has been able to bring in about 75 clients that represent $181,000 in annualized billings working for Jong during this rough economy. He offers some good pearls of wisdom for other CSRs out there and I encourage our Plan 2 clients to have their CSRs read this article.

Chris: First question for you Jeff, is a little bit on your background could you please just tell me about your sales and marketing experience up until going to work for Jong Lee?

Jeff: Sure, after I finished college I sold office equipment. After [doing that] I did loans [for a mortgage company] and then obviously the bottom fell out of the loan industry. [So] I spent a couple months at home with my little boy and then came to work for Jong.

Chris: How old is your son?

Jeff: My younger son is two and my other son is eight.

Chris: Obviously going from selling loans to accounting services is a little different, how did you benefit from the NCI training?

Jeff: The NCI training showed me how to sell the service, how to find what features were best for the client and [explaining to] them the benefit of that feature.

Chris: Yes, that’s important you have to focus on those benefits not just the features a lot of people tend to just focus on the one side and not the other. What’s a typical day like for you working as a CSR?

Jeff: My typical day includes checking in at the office, making calls, checking my E-mails, making some calls to customers. Making sure my marketing department, my [appointment setters have] some people to call and also going to those appointments and trying to seal deals.

Chris: What would you say is the most rewarding thing about this position?

Jeff: The most rewarding thing (other than making money,) is that with certain clients, their financial situation is [such that] they’ve let time go by and they’re kind of just in a mess. [A mess that we are then] able to help get sorted out. That’s a rewarding feeling; I mean to get their stuff in order so they can concentrate on their business.

Chris: What do you think is the hardest part of this job for you Jeff?

Jeff: The hardest part for me I would say is; sometimes in an economy like this people don’t want to spend more money even if they have a problem with their books and things of that nature. Sometimes the hardest thing to do is convincing them that by turning things around in their financials, it can get them to concentrate on their business and they’ll make more money in the future. So it’s kind of tough, especially for the real small businesses to get them to accept that they need the service.

Chris: That makes sense, with what’s going on in the economy things are a little tougher and every body’s watching their expenditures more closely. Speaking of that, what do you contribute the great success that you’ve been able to have in this program to, especially during this tough economy?

Jeff: I think it’s just being persistent, I mean “No” doesn’t always mean “No”. It could mean “No” right then, the prospect could be having a bad day; they could just be not open to anything that day. To be persistent though, to check back in with them, to call them back when they tell you to call them back, and to really listen to them, I think these things benefits me [in the sales process.]

Chris: Definitely, with persistence you can apply that to any facet of life and really get a lot from it. So I think that’s an important aspect to understand, especially in a sales position. You have to be persistent and you have to be motivated. How much business have you been able to add to Jong’s practice so far?

Jeff: We’re at about 75 new clients, and the annual billings I’m not sure right now. (Roughly $181,000 according to Weekly Report spreadsheet)

Chris: And how long have you been working for Jong?

Chris: 75 clients in a year, that’s great. I also noticed in looking at the reviews that you sent over to NCI that you’ve been able to collect large sums of back work quite frequently, so I wanted to also ask you how you’ve been able to do that given the current economy and people having less money to spend, do you attribute it to anything in particular?

Jeff: Yeah, you know to collect back work, what I say is “Well you can do it yourself, or you can have us do it.” Usually when they haven’t done any bookkeeping in six or seven months they’re not going to be able to complete it all. So what I do is, just basically quote them for the back work and I give them a time that I need it by and I try and stick to that time and it usually works.

It’s good to give people a deadline and obviously the prospect of doing all that work themselves is not appealing.

Especially when they haven’t done the work at all in the first place.

Chris: Exactly, they didn’t do the work for a reason, so that makes sense. What are Jong’s feelings on the job you’ve been able to do so far?

Jeff: Jong’s happy with how things go, and we work very closely together and I think we have a good understanding of each other and I think he’s happy for the most part.

Chris: It sounds like a good working relationship. Do you have any advice that you might give to some other CSR’s that are in the program?

Jeff: What I would say is just really to be persistent. The first month I was here I had a tough time. You’d like to have one call closes every time. But if you don’t get them, “No” just means no that day. So I always follow up, I just closed a client the other day that I saw the first month I was here. So just fill the pipeline up and be persistent.

Chris: That’s simple but not easy advice; the hard part is following it. It’s not always easy to be persistent and keep calling people and keep working people who may or may not have an interest. But like you said, things change on their end. A lot of it comes down to things that you as a sales person have no control over so you just need to continue to work those particular prospects and wait till the timing on their end is right and then they’ll sign on. A lot of it comes down to timing but you’re not going to be able to hit that right timing unless you’re following up consistently.

Chris: And Jeff is there anything else you wanted to add?

Chris: How has it been working with the appointment setters for you?

Chris: You still have them a year later? I’ll tell you, that’s a rare thing. In terms of any money issues that you might be running into because of the economy, is there any particular way you handle that? I’m sure a lot of people are curious how you address that.

Jeff: You can go into a situation and if they don’t have the money obviously there’s not much you can do, but when they don’t have that much money you really have to sell your service that much more. You can help them be more profitable by saving them money on their taxes, they’re going to have a clean cut set of financials so they don’t get audited which can cost you money. I mean, there’s different ways of going at it to show that they can save money, you just have to put it out there and hopefully they listen to you.

Chris: I think the most important aspect, the whole reason you’re there is to help increase their revenues by better managing their business. So if they can’t pay for the service it should indicate to them that they need good financial help even more to get it turned around so that they do have that extra money to spend. That’s all I have for you Jeff. I really appreciate you taking some time to do this interview with me.