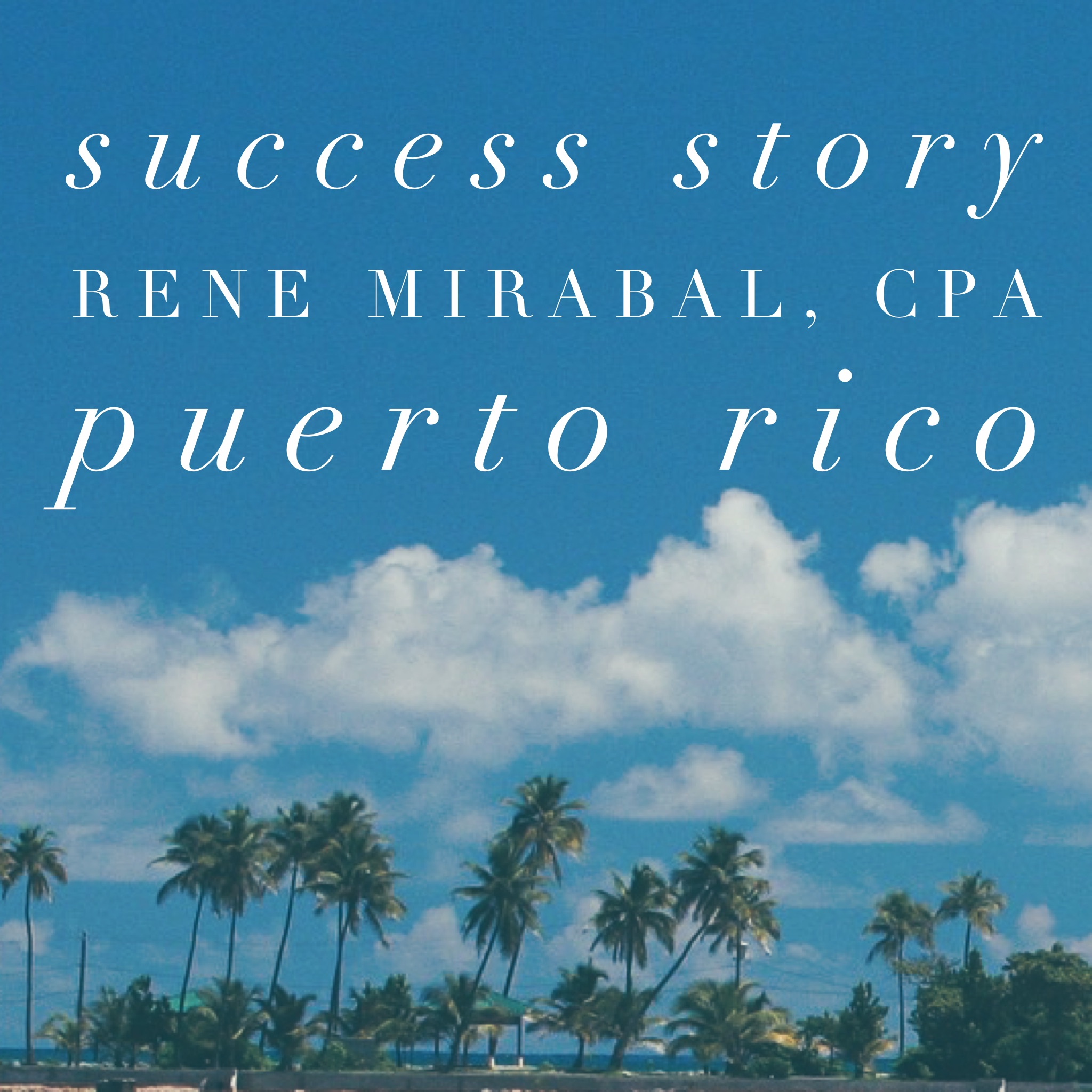 An Island Unto Himself

For this latest edition of this series I interviewed a more recent client. We wanted to focus on someone who is doing well in our national sales race. It just so happens that as of the first week of May, Rene Mirabal and his CSR Frances Lopez have currently taken first place in the national sales race with $84,000 in new billings since starting in December 2007. Rene also has the distinct honor of being our first Plan 3 program in Puerto Rico, which he admitted was a bit unnerving when he was considering doing the program. He is now very happy with his choice and he can also lay claim to being our first great success story in Puerto Rico. Rene asked me specifically to note the fine job his appointment setters and CSR have been doing to help him grow his practice. It is interesting to note that Rene originally came through our practice development seminar 15 years ago! You can read for yourself how Rene felt before and now during this process in the excerpts from our interview below.

Chris: Tell me a little bit about your background leading up to owning your own practice.

Rene: I graduated with a major in accounting from the University of Puerto Rico in 1986. I then took the CPA exam in that year and then I started working with Ernst and Whinney at that time which is Ernst and Young now. I spent about two years and a half there then I start working with Johnson and Johnson for a couple of years then I accepted a position as controller of a major cement manufacturer in Puerto Rico I was there, I would say for about three and a half years probably. Up to 1993, in 1993 I decided to start my own practice and actually what I did that year is I went to a seminar, a seminar that was given at that time by Bruce Clark for new clients so I can learn some of the inside information to start your own practice and how to successfully sell my services.

Chris: Tell me a little bit more about your experience in 1993 with the NCI seminar

Rene: It was 1993, I incorporated [what iI learned} into my presentation, basically the [thing] that I related to, [was] what kind of services we offer and some graphic presentation of the [monthly services] that we do as part of our monthly accounting. I think [having] that is a major advantage because many accounting professionals just try to verbalize what we do and clients cannot understand many of the things that we actually do and trying to explain that without a written presentation is difficult to understand. It’s more like a product I think what we are offer and you have to convert that from intangible to a tangible product and that way clients can understand [it] more easily.

Chris: How much growth have you added since starting the Plan 3 program at the end of November?

Rene: Yeah, basically as of now, as of today we have 32 new clients and on billings I would say they are 80% of my previous write up billings, so 15 years of efforts… then when I started the New Clients approach basically I have about 80% of 15 years worth of referrals and growing the client base, I got that basically in about 5 1/2 months.

Chris: How does that feel?

Rene: I think it’s good, it’s a lot of work we have to get organized, we have to prepare some standard operating procedures to use so that new clients do not fall through the cracks. We have to set them up correctly and start them up very quickly because we are getting about 8 new clients every month.

Chris: Are you surprised by the growth you have added so far?

Rene: Yes and no, I would say yes because I’m in the middle of it and in the beginning I was a bit skeptical of the telemarketing and how that would work here in Puerto Rico where I thought that we were more used to face to face presentations [with the accountant] and that kind of securing clients. But then I realized that everything that is in the testimonials in your website, that’s exactly what we are seeing right now. [To see the testimonials Rene refers to click here]

Chris: What brought you to NCI in the first place?

Rene: I saw an ad in the Journal of Accountancy [in 1993] where you still advertise.

Chris: And what about more recently, what prompted you to contact us again?

Rene: I think it was a flashback (laughs) I think I was on the internet and I was thinking about how I can make my practice to grow and it came to my mind and I said well I went to this seminar 15 years ago let’s see how these people [are] doing and I just went through the internet and found New Clients still there and a couple of differences now. One is that there were many testimonials from CPAs, that wasn’t as normal 15 years ago. The other thing is that telemarketing is much more accepted now. People are not as skeptical now when they receive a call offering services. It has been done by the investment industry widely, so it’s an advantage now to offer accounting services, people are more used to it because mortgage banking and brokerage industry are using the telemarketing approach to sell their services, so I would say it’s much more accepted. It also showed me that the New Clients approach has [continued to] work after 15 years. That was one of my main concerns at that time, I wasn’t sure if the telemarketing script, first if it was going to work for CPA services and if it was going to work in Spanish for a more conservative, from the business standpoint, [the] Latin American business environment is more face to face and the custom is basically to do business face to face and with a handshake. I was the first one who was very surprised, I think we got on the first week, the very first week, we set up about 17 appointments… at that time I said well okay we did 17 appointments that’s fine, let’s see what the [salesperson] does now. And then on the first week we signed about three of them, the first one was an $800 per month account. What is more surprising is there is a telemarketer calling, there is a salesperson signing the client so that when they finally meet the professional, they’re already committed. They already said yes to the appointment, they already said yes to the service and it’s a kind of strange feeling that I don’t have to sell my services.

Chris: What was your biggest concern before committing to the Plan 3?

Rene: There were two, one was that I wasn’t sure it was going to work, I’ve been on my own for 15 years, and basically I have obtained my clients by referrals or by existing clients expanding, and I still think I don’t know why many people just say yes before they know me, and I’ve realized that we are selling a product and everybody needs accounting services. It doesn’t depend that much on the professional by itself, it will at the end though because if not they will not continue to use the service. But at the beginning it’s just a matter of necessity, they need the service and if the price is right and the impression is right, they feel enough trust in the CSR. I didn’t understand that in the beginning, I still have trouble believing that (laughs) but it’s a reality.

Chris: Future goals and plans for the practice?

Rene: I would like to replicate Duane [Gravely’s] model. I saw how that worked and that’s what I would like to do. I would like to have 300 clients, I would like to implement the compensation model that he has for his [employees] I think that anyone that is interested in plan number 2 should consider plan number 3 which is basically number 2 plus Duane [‘s processing training] I think it’s very useful to have a person with his experience that is managing about 300 [monthly] clients very quietly I would say. We went to his office [as part of his seminar,] I was expecting many phone calls and many people running from one office to another, and 20 clients stepping through the door, that’s what I was expecting. That showed me that if you do everything planned and organized you can handle 300 [monthly] clients very efficiently and effectively.