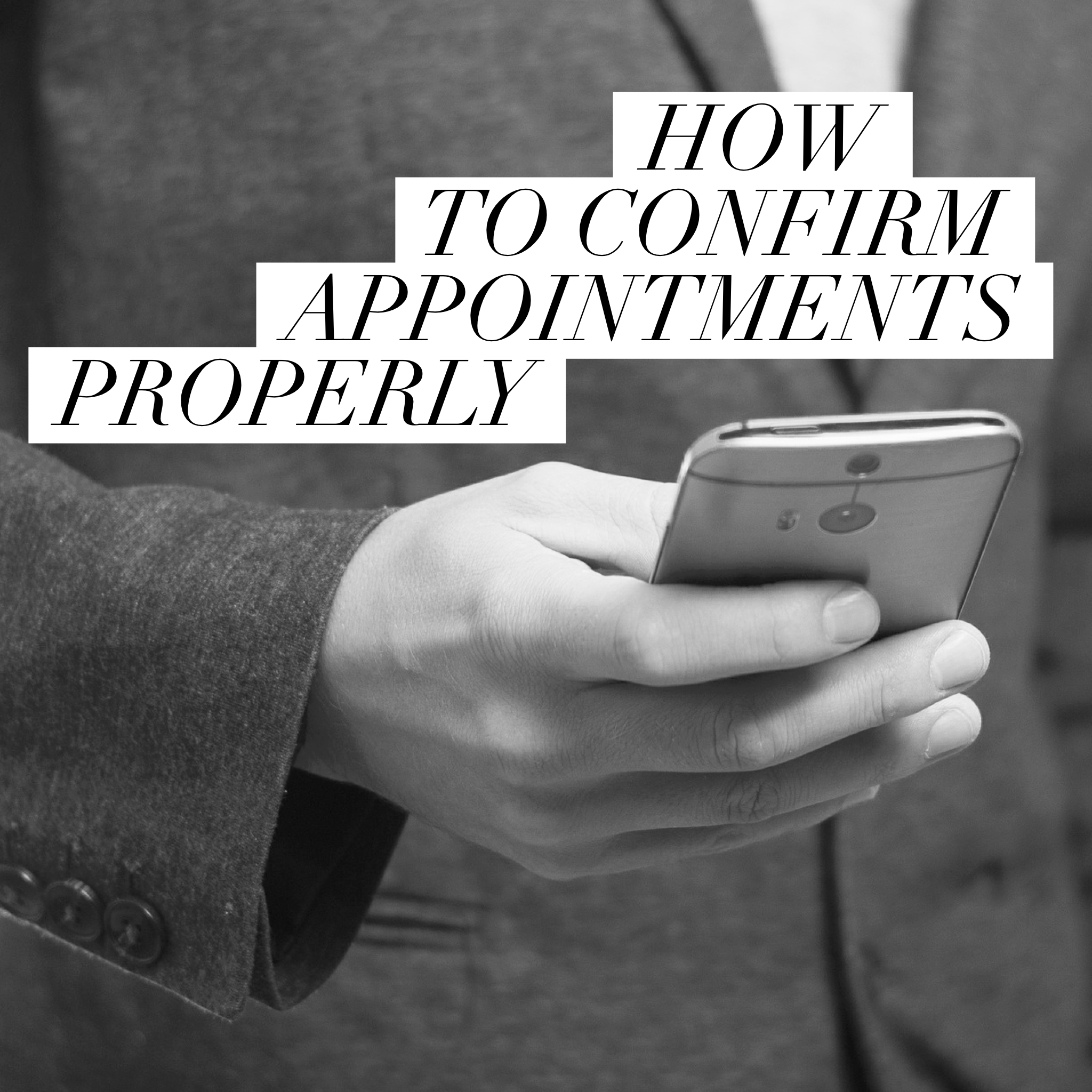 How to Confirm Appointments Properly

In recent conversations with accountants and client service representatives I have heard complaints about prospects who fail to show up for their scheduled appointments. No-shows are frustrating; they represent a waste of your or your CSR’s valuable time and burn through gas budgets as well. There are actions that can be taken to minimize these no shows. In this article we will review some of these actions.

First of all, if you have participated in NCI’s training program, you know that you should confirm all appointments one hour prior to the appointment time. Some CSRs tell me that they hesitate to do this because they fear that this confirmation will give the prospect an opportunity to cancel. My response, when I hear this objection, is to ask whether it’s better for a prospect to cancel before or after you have driven to the appointment. My point here is that if the prospect is unwilling or unable to give full attention to your message it’s better to know this before you spend time and gas traveling to their location. It might be a better idea to reschedule or have your appointment setter reschedule the appointment for a time when you can have the undivided attention of your prospect. Another way to help combat appointments cancelled at the last minute during the confirmation call is to change the nature of that call. I recommend calling from your cell phone right before you leave the office. Tell the prospect you are in your car heading for their business and you are just calling to confirm the directions, not confirming the appointment itself. There is a guilt factor at play here. If you are already on your way over for a preset appointment, it doesn’t exactly look good for them to cancel at that moment. Don’t give them an out if you don’t have to. Some will still cancel, sure, but others will hesitate to do so thanks to using this method.

If you find that some of your prospects are simply forgetting that they have an appointment with you it may be a good idea to confirm a day ahead of time as well as an hour ahead of time.  Some CSRs have their appointment setters perform this confirmation, others prefer that the prospects hear their voices when confirming. I personally recommend sending off a quick reminder email the day before the appointment. However you choose to do it I have personally found that this extra confirmation saves a lot of appointments that otherwise would have to be rescheduled without it.

The script book that NCI provides to appointment setters has a full page of “qualifying questions” that can be used to effectively gauge the interest and quality of your prospects. You should encourage your appointment setters to learn and use these questions and to note the prospect’s responses on their appointment report. A byproduct of these qualifying questions is that they can often pique the prospect’s interest thus increasing their urgency to meet with you.

Some appointments will have to be rescheduled no matter what you do, for example when a family or business emergency occurs. It’s also important whenever someone cancels an appointment to find out why. Try to find out what happened between the time they scheduled the appointment and had an apparent need and now when they are cancelling it. What changed in that (usually) short frame of time? Sometimes this will lead to a conversation in which you can salvage the appointment and turn a cancellation into a reschedule. Anytime someone wants to reschedule set another appointment for a specific date and time. Don’t leave it open ended as in “you’ll hear from me next week” because the reality is you probably won’t. Hopefully, by always following the above steps you will be able to minimize cancellations, reschedules and the time and money wasted on no-shows.

Ian Shumaker is a retired Senior Account Executive was with NCI for over six years. Prior to that he was Sales Manager of a utility consulting firm for ten years, he sold computer software for many years and is a Retired Army Infantry Officer.