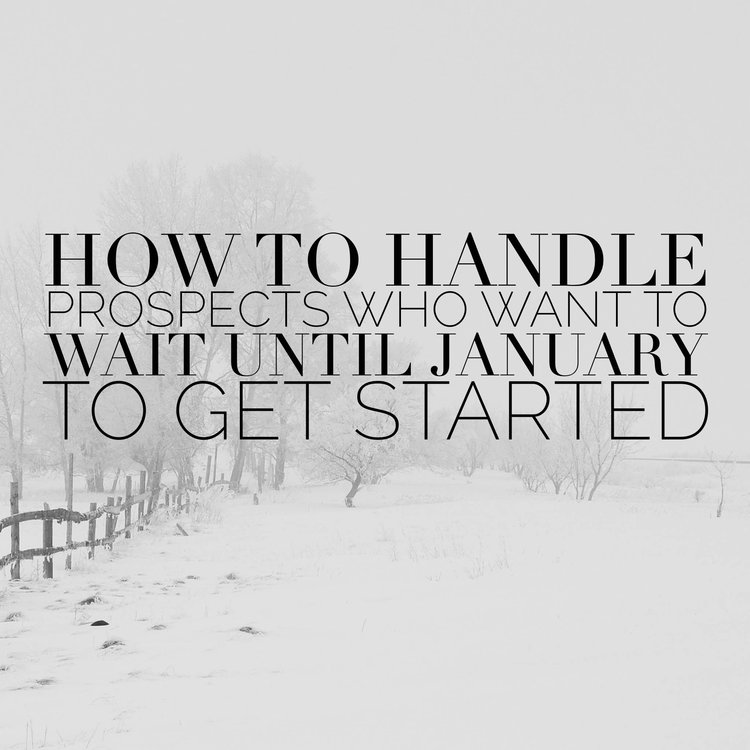 Here’s a strategy I’ve used late in the year for those “let’s wait until January” people. I’ve used this effectively as a CSR myself and have taught other CSRs this as well, many of whom were able to secure deals they might not have otherwise:

If they are really serious about starting January 1st, first acknowledge the logic of doing so, but then say that we want to gather their basic information and approval on the agreement form, AND get their check for the installation and first month’s fee. It would be indicated on the agreement that the first month’s fee represents January, so they wouldn’t have another monthly fee payment until February. What’s in it for them to do this now? First, they have their initial meeting with the accountant now, and it’s a great opportunity to set everything up to hit the ground running come 1/1. More importantly though, the accountant can do year-end tax planning which could save a lot of money come filing time. On top of this, from the time they sign on, they can take advantage of the unlimited consultation feature. The firm won’t prepare financial statements, sales tax returns, etc. until after 1/1, but the client has some real incentive to get started now, and not after the first of the year.

This strategy would probably work best with someone who’s not working with an accountant, but I’ve signed on people in spite of that–what’s wrong with another set of eyes when you’re at year-end?

If they don’t have an accountant, or only use the accountant for tax preparation, the client oftentimes will have the firm do the tax return for that year as well. If the business hasn’t kept books, all that backwork gets incorporated into the fee to do the return. They’d have to pay somebody to do it!  The firm gets backwork fees without even mentioning the word “backwork”. The installation meeting would be a perfect time for the accountant to discuss with the client how to organize their records so as to minimize the tax preparation fee. If they’re on QuickBooks, the accountant can start looking at their file.

Bottom-line, if the CSR gets the installation and first month’s fees, the client has skin in the game. If they only get an approval on the agreement form, it’s far easier for the client to renege after January 1. Of course, this won’t result in a close right then and there each time, but it certainly helps secure a few more clients this time of year.